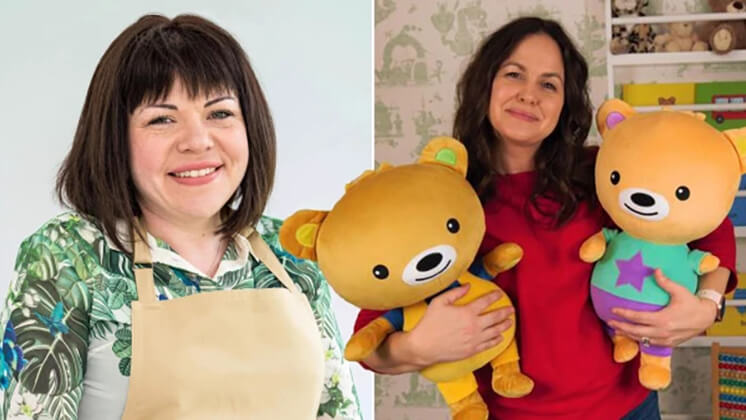 Former Great British Bake Off contestant Briony May Williams has commended Giovanna Fletcher’s new CBeebies show for including a character with limb difference.

Earlier this week, it was announced that Giovanna’s first TV role since being crowned the winner of I’m A Celebrity… Get Me Out Of Here!would be as co-host of CBeebies programme The Toddler at Home, alongside Nigel Clarke.

The series is a spin-off from The Baby Club, which Giovanna and Nigel previously presented together.

In a press release published for The Toddler at Home, Three Arrows Media, the production company behind the show, announced the introduction of two new cuddly characters.

‘[Giovanna and Nigel] are ably assisted by new soft-toy characters the Toddler Twins – Benjee Bear and Bailee Bear – the latter of whom has partial limb loss and is missing her lower left arm,’ the announcement said.

Briony, who was born without any fingers on her left hand, celebrated the news on Twitter, writing: ‘I can’t tell you how wonderful it is that @MrsGiFletcher’s new @CBeebiesHQ Toddler Club is including a character with a limb difference.’

I can't tell you how wonderful it is that @MrsGiFletcher's new @CBeebiesHQ Toddler Club is including a character with a limb difference¸ Positive representation for children goes such a long way! #limbdifference — Briony May Williams (@brionymaybakes) December 11, 2020

The baker, who competed in 2018 series of Bake Off, continued, writing: ‘Positive representation for children goes such a long way!’

Several other Twitter users joined in with Briony’s praise for the programme.

‘This is brilliant #RepresentationMatters,’ another commented.

Each episode of The Toddler Club at Home, which will air in the new year, will see Giovanna and Nigel invite viewers virtually into their homes, where they can join in with singing, dancing and storytelling.

‘From ways to explore numbers, shapes and patterns, to helping your child safely explore their individuality, Nigel and Giovanna show how to get the most out of the everyday activities and challenges that parents and toddlers face at home,’ Three Arrows Media stated.

Last month, Briony voiced her anger over the portrayal of limb difference in the 2020 film The Witches, which depicted Anne Hathaway’s character with missing fingers on both of her hands.

The actor and Warner Bros have since issued statements of apology over the controversy.

‘When I look at the pictures of @annehathaway with her witch hands, it brings tears to my eyes because I see MY hand in the photos. I see my genetic disorder that caused me to be born without any fingers on my left hand. I see something to be afraid of, something meant to make you feel sick and revolted,’ Briony wrote about the issue in a post shared on social media.

‘I feel desperately sad for those people out there, especially children, with a limb difference who are ashamed of it or embarrassed because this will knock them harder than you know. I’m so pleased that people and charities are speaking up because it’s not ok.’

The Toddler Club at Home will air on CBeebies in January.